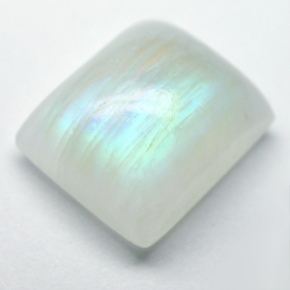 Personally, my understanding of moonstone is one of the strongest of any gemstones and my ties with its feminine power go back as long as I’ve been studying Wicca. As a gem ruled by the Moon itself, moonstone has some of the strongest bonds to the moon phases of any stone. It’s power waxes and wanes and even coincides with the ocean and its tides.

Moonstone is governed by the moon goddesses and ancient Roman and various Asian cultures believed the stone was actually formed from moonlight. The stone is still considered sacred in different parts of the eastern world today.

Adularia moonstone is an almost transparent pale gray or silvery white or blue shimmer. It is mainly found in Sri Lanka, Burma, India and Madagascar. Albite moonstone is in the feldspar group. It is semitransparent with a pale, shimmering reflection. It may be a little dull. It comes mainly from Canada.

Moonstone is a diverse gem especially useful in the formation of charms and amulets. Moonstone jewelry has been hung from trees to promote crop growth. Necklaces and rings can be easily charmed to attract a faithful lover with its soft, gentle energy.

Moonstone has also been used to protect those that travel by night or by sea. It protects use from insanity, epilepsy, and adverse wanderings of the mind. The ancient Greeks called Moonstone “Aphroselene” after the goddesses Aphrodite (love) and Selene (moon).

“Moon magick” refers to any spell that gains its power or is directed through the energy from the moon. These spells include fertility, introspection, scrying, emotional control, enchanting charms, finding love, childbirth, and spells focusing on feminine energies in general.

Moonstone is the stone of the goddess Diana and is useful in all moon magick; espeically when used during a full moon.

Moonstone is used by healers to stimulate the functioning of the pineal gland and balance internal hormone cycles with nature’s rhythms. Moonstone is a stone of inner growth and strength. It has the power to reunite lovers who have quarreled. It is known to have a deep protection over those who are sensitive in nature. Though often considered to be a woman’s stone, it can be beneficial to men in opening the emotional self.

One of the most powerful ways to use moonstone is to to have young children suffering from night terrors to wear the stone to sleep. Here is a simple prayer:

“Goddess, I turn myself over to you.
With this prayer, I now find peace.”

*Note: I have found moonstone to be extremely powerful when used by young women, especially women who’s natural Element affinity is Water.